Ideas and Insights Changing the World

Edited by Robert J. Rosenthal for VolunteerMatch, with chapters by
35 experts in the field of volunteerism 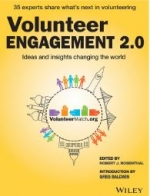 VolunteerMatch is highlighting the 35 chapter authors in a series of blog post "interviews." Mine just went live. If you aren't already reading the Engaging Volunteers blog that VolunteerMatch produces, you should!

Volunteerism has changed and I hope this book gives leaders and recruiters better insight.

Looking forward to learning more about this community!