Watching, Helping and Learning from China

Last week I returned home from an incredible vacation in China, including 4 days in Tibet. It was a complete, refreshing break from work – fun to pack a suitcase without training notes and overhead transparencies! Yet as I begin to reflect on the trip, share my photos and stories with friends, and hang the artwork I bought, I find myself thinking more and more about what the experience taught me about volunteering. So I am using this forum to consider a topic that is “hot” only to me personally, though I do believe it warrants much more attention and exchange among us.

First, Some Background (the volunteer-related stuff is coming!)

Without the remotest desire to provide a travelogue or history lesson, China is different from almost any other country on earth in significant ways. The operative word in defining the country is huge. The scale of everything defies imagination: expanses of astonishing mountains and desert, endless rivers, a population over 1 billion with 33 cities larger than 1 million people. Beyond the physical statistics, there is also a future-planning mindset that is rooted in antiquity. Visiting the Great Wall that runs 3,000 miles across inhospitable terrain, or the unearthed thousands of terracotta warriors in Xian, or any of the mind-boggling structures such as the 1,000 room Potala Palace of the dali lamas in Lhasa, Tibet (http://sacredsites.com/asia/tibet/potala_palace.html) impresses the visitor with the builders’ long-range convictions. To devote decades of both creative and back-breaking labor to a project means it’s expected to last.

China today is in the last stage of building the largest dam on the planet (Great Gorges, across the Yangtze River), a project that is breathtaking in its scope. It will create a man-made lake the size of Lake Superior in the US Great Lakes, require the relocation of one million people, provide electricity to millions, and even divert new water sources to the aging Yellow River. It’s all planned out and seemingly on schedule. Construction for the Beijing Olympics in 2008 and the 2010 World Exposition in Shanghai includes wholesale relocation of factories to improve the air quality of both cities in rapid time.

I am not ignoring the political realities of China, neither today nor in the past. Over the centuries, the Chinese have coped with emperors who were brilliant or despots, often both. The 20th century brought the end of royal rule but introduced the most repressive form of communism, including the irretrievable destruction of countless cultural and religious masterpieces. Both forms of government believed in isolation and it’s hard to find another nation as unobserved by outsiders for so long. And along with the urban growth there remains a vast population of rural peasants with little access to any of the benefits of modernization or even education.

But now China wants to jump into the 21st century with all its two billion feet. Today, for better or for worse, there is a new veneer of western-style prosperity in the cities and our guide reported that KFC (Kentucky Fried Chicken) is the most popular spot for a teenage dinner date. Fundamental repression of speech and action is still very real, but many of the superficial restrictions of dress, recreational options, and even individual entrepreneurship are largely gone.

OK, So What about Volunteers?

During a home visit on our third day in China with a delightful 70-something woman in the hutongs of Beijing, someone in our tour group asked through the interpreter, “How do you spend your days now that you are retired from your office job?” The woman began with the usual tale of tea with friends and visits with her grandchildren, but then broke out in a big smile to announce: “I hope to be a volunteer at the 2008 Olympics!”

As the group applauded, Betty Stallings (she and her husband were also on the trip) and I flashed a thumbs-up at each other across the room. I was taken by surprise as I realized the implications of this seemingly-simple wish to volunteer. First, the fact that the woman understood the important role of volunteers at all the modern Olympic cities meant that television and other news stories, even under censorship, had offered an appealing glimpse to the Chinese of the way other countries organize the event. Second, it was clear that the Chinese language allowed her and the translator to articulate the concept of volunteering in this context. And third, I was struck by the evidence that the urge to participate proudly in something big and exciting happening in one’s hometown is truly universal. We came in contact with two other volunteer examples during our trip. The next was in Tibet. Outside of the Jongkhar Temple in Lhasa sat a group of people cheerfully cleaning the wax off a large pile of candleholders. Our guide explained these were Temple volunteers who helped to maintain the rooms for the thousands of daily pilgrims. 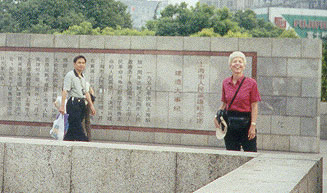 Later, in Shanghai, we visited a memorial to the revolution that was accompanied by a wall – just as in the west – listing all the donors who contributed to the structure. We were also aware that one of the newest affiliates of the Hands On Network (the recent name change from CityCares) is Hands On Shanghai (www.handsonshanghai.org). Although it was started to give westerners living in Shanghai a way to give volunteer time to Chinese charities, it is also working to engage local people in projects of their own.

Before anyone challenges me, let me make clear that: 1) I can hardly claim any expertise in Chinese culture based on a three-week vacation; 2) just because Chinese volunteering is new to me does not make it new to the Chinese; and 3) there are undoubtedly issues related to how the Communist government has approached community service (certainly in the past and possibly still today), including mandating some unremunerated work without any semblance of voluntary choice. But, when I returned home I did some Internet searching and, not surprisingly, found a variety of current Chinese volunteer projects and took at face value what they said on their Web sites about themselves. For example:

In recent years, volunteer service in China is developing very fast and gains great attention and support from Chinese government. More and more citizens are willing to volunteer and various voluntary organizations are established. How to effectively manage this increasing volunteer group? How to make a full use of the rich volunteer resources? These questions have been aroused great attentions by volunteer service managers and practitioners. 5

The international volunteer community has an unparalleled opportunity to watch modern volunteering evolve in China – and both to contribute support and learn new things. It would be terrible if all we try to do is superimpose western volunteer methods onto the Chinese situation (which, unfortunately, is what seems to be happening in eastern Europe). Certainly some practices are universal to success, such as defining work clearly, designating a coordinator, and inviting as many people as possible to join in. But I wonder if the following is being incorporated into modern volunteering to match Chinese tradition and, if so, how it might be exported to the outside, as well:

I do not know how all this will evolve, but I am certain the implications will be huge. Further, we need to pay attention to volunteer patterns in all the countries of Asia, since more human beings live in this area than anywhere else on earth, and also because there are growing numbers of citizens with Asian traditions living within our western countries. We have not really learned how to tap this potential volunteer resource, but I’m convinced it is awaiting our outreach.

Do you know more about Chinese or other Asian volunteering? Please share your thoughts with the rest of us.

What do you think we can learn from China or other Asian countries in terms of volunteering?