Is Volunteering the Emperor's New Clothes?

It’s good news that high-ranking people are talking about volunteering in all sorts of public forums. The bad news, however, is that each corporation and national organization wants to "wear" volunteerism…for only a moment. They brand a new initiative, launch an independent Web site, and promote their effort as the most desirable. The glitz of each launch most often ends up as a "flash in the pan," with very little impact on any of the important community work that needs to be done.

Why is volunteerism up for sale and up for grabs like summer’s most popular fashion? Maybe it’s because service is an easy platform for corporations and institutions to gain a halo effect merely by stating a commitment to community involvement – with no risk of being held to promises made or even having to report back any activity at all.

Shouldn't high-profile volunteer promotions be held accountable by someone? It won’t be by the large nonprofits that happily take the corporate funding to underwrite other work. It won’t be the mass media that aids and abets the hype in their news coverage. So what about those of us who recruit and coordinate volunteers on the front line? We need to protest when the emperor has no clothes.

They Come and Go 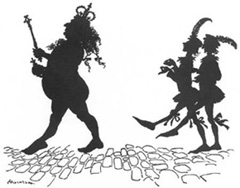 Right after the 2009 Serve America Act many volunteer-related initiatives were launched in the United States (and around the world). Let’s revisit some of them and see what happened.

We saw three really big campaigns: the "Scoop It Forward" ice cream give-away run by Ben & Jerry’s, VolunteerMatch, and Target stores; the Starbucks exchange of free coffee for 5 hours of service; and the "Give a Day, Get a Disney Day" campaign that urged people to volunteer for a single day to get a free ticket to a Disney theme park (it ended abruptly when all one million available tickets were distributed in two months).

Can anyone tell me what actually was accomplished in a real-life organization by an actual volunteer as a result of these very visible campaigns?

At the 2009 National Conference on Volunteering and Service, the Entertainment Industry Foundation (ELF) committed to mobilizing the entertainment community "around a groundbreaking initiative designed to inspire a new era of service and volunteerism." We were supposed to be flooded with mentions of volunteering in TV shows and movies, but that effort fizzled out almost immediately. ELF created its own Web site and brand,"iParticipate," to publicize what celebrities are doing. Today it has lots of celebrity photos but no substance. Has anyone questioned why this effort failed, or asked Points of Light to follow up in some way?

I could keep going, but you get my drift.

Now take a look at the just-posted "conference highlights" report of the 2012 National Conference on Volunteering and Service. You’ll quickly see that every cause and initiative was donned by a corporate sponsor with a pretty penny, providing visibility and goodwill, but not necessarily with any obligation to do more than write a check. Below are the actual words used in the report:

How does all of this expense and promotion actually further volunteering or have a real impact on the needs of society? Is the emperor wearing any clothes?

The crux of the matter is that almost all of these initiatives lack clear goals. Are the promoters attempting to increase volunteering for volunteering’s sake, no matter how insignificant the service may be? Or do promoters want to make a difference in our world through progress on a cause or help to individuals in a time of need? While urging people to volunteer, these campaigns have no strategic focus on the results of the service being pledged or sponsored.

So What Can We Do?

There is nothing wrong – and actually quite a bit of good – in many voices repeating the invitation to get involved. But if our goal in the volunteer community is to increase and sustain volunteering over time, promotional campaigns must go beyond hoopla to legitimacy. We can hold them accountable.

Individually and through our professional networks, we could take some action (and it might even be fun!). For example: