A History of Americans as Volunteers, New Century Edition 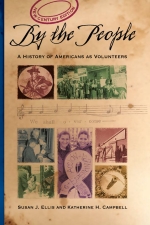 Electronic books will be made available for download immediately after purchase.
US$16.00