The United States is at the start of a contentious presidential election year in which candidates with widely differing views each attract thousands of volunteers sharing those views. All of us recognize election volunteering as a political act but, in truth, any type of volunteering is inherently "political."

Dictionary definitions of "political" primarily relate to government or public policy. Yet we also use the word as "relating to views about social relationships involving authority or power" – most famously expressed in the 1970s by the feminist movement as "the political is the personal and the personal is the political." Because volunteering is proactive support of an organization, cause or issue, it is always also a political act.

Sometimes such support is deliberate and meant to change the opinion of others. That’s what marches, rallies and other forms of protest are all about. The crowds massing in public squares throughout the Middle East demanding change and the Occupy Wall Streeters are just recent examples of a long tradition. (Ask yourself who threw the tea in Boston Harbor and remember no one is paid to start a revolution.) 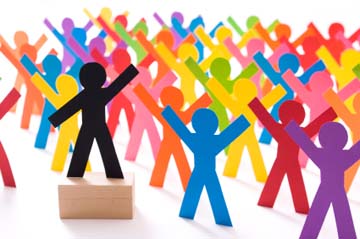 More often, however, the things volunteers do imply social philosophy and political beliefs.Taking action to care for vulnerable people, whether old or young, hungry or in trouble, prioritizes caring for others. Some express religious motivations for such volunteering, but anyone engaged in human services wants public policy to work at alleviating hunger, homelessness, lack of health care, and all the other things many refer to as the "social safety net." Giving time to cleaning up or monitoring the state of the environment comes from concern over inadequate environmental protection policies or enforcement. Volunteering on behalf of a performing or cultural arts institution demonstrates how people value the importance of this element of life.

Of course we know that there are many reasons people volunteer, from fun to career exploration to guilt. Not all volunteers are consciously aware of the political nature of their service and may even be surprised to have this pointed out. But just as our financial donations imply what matters to us, the giving of time is "putting our bodies where our mouths are." There is much more personal, even physical, risk in volunteering than in check writing; why would we take that risk for something that doesn’t matter?

What would happen if we intentionally appealed to the political motivations of prospective volunteers? Instead of recruiting mainly by expressing the needs of our organizations and clients, we might put our work into a broader community perspective. For example, look at the approach suggested in these three examples:

The desire to work for change also motivates nonprofit and government employees. But once on the payroll,employees must do what is required by the job. Volunteers, have more freedom (if they wish to make use of it). They can challenge policies on behalf of the clients or public they care about. As private citizens and voters, they can write to legislators and do lobbying not permitted to employees. By affiliating with your organization, however, volunteersmust also accept responsibilities as part of a collective effort. If this becomes too limiting, ultimately volunteers can walk away, even to form their own organization if so motivated.

Not enough organizations encourage or prepare volunteers to be public advocates as well as service providers. Why not hold periodic meetings – optional, of course, for those volunteers who are interested – in which the staff explains current issues needing backing from the community? Then ask volunteers to speak to their friends and colleagues, correcting misperceptions and giving the facts. Make volunteers aware of proposals for legislation that should be protested or supported.

Invite other ideas, too. But be aware that volunteers may not agree with the position your organization takes on all issues. That sort of resistance may be uncomfortable to executives, but can also help you to consider all sides of an argument.

Traditional Republican leaders are experiencing the maverick nature of volunteers in the Tea Party. Initially seen as committed, if extremely conservative, Republicans, the volunteers of the Tea Party won’t toe the "party line" if they disagree. Whatever you think of this, they are exercising their right to be independent. A democracy gives its citizens the right to freely give time, energy and skill to causes and candidates of their choice.

Just remember: come election night, every candidate – winner and losers – will at some point declare, "And I wouldn’t be here now if it wasn’t for all you wonderful volunteers who worked so hard for me." And they will all be right.