As I write this, the United States is dealing with the aftermath of what is reportedly the largest storm ever to hit the northeast coastal states, affecting upwards of 60 million people. Being in Philadelphia, the weather is obviously on my mind! But being volunteer-focused, I also recognize that once again this sort of disaster evokes what we have come to call "spontaneous volunteering" of every conceivable sort. What makes it more notable right now, however, is that the U.S. is one week away from our presidential election – another major event also involving countless volunteers.

What can we observe in all of this outpouring of time and effort for two very different causes and what implications can we see for calmer times? Let’s do some analysis from our volunteer leadership perspective.

A Wide Spectrum of Volunteers Converge

The sheer numbers of people participating in disaster relief and electioneering demonstrates that we have not yet come to the bottom of the well in terms of available volunteers. When there is a clear, genuine need (the storm’s effects) or a deep personal connection (political principles), people step up. Not everyone, but many more than the skeptics expect.

What deserves closer attention, however, is how volunteering in these circumstances reveals a wide spectrum of different types of involvement.

At one end of the spectrum is formal volunteering, the kind that is fully intentional, planned in advance, and involves such things as position descriptions, interviews and screening, training, and partnering with paid staff. This is certainly the case with the thousands of skilled and even certified first responders, firefighters, and emergency relief volunteers who spring into action when needed. Note that election campaigns, too, have key volunteer positions requiring planning and skilled execution, which is also the case with the army of unpaid election officials and poll watchers prepared to work for a single day every few years.

Moving across the spectrum we next find people who step up when it’s evident they must. Some have the professional or occupational skills clearly needed in an emergency, such as retired medical workers and anyone with a range of construction skills. They volunteer their services because they know they can, but don't necessarily think of themselves as "volunteers" but as experts who are offering to give their services without pay. No one has ever studied whether or how this nuance makes a difference, but it certainly affects how they expect those in charge to interact with them.

I’m not sure whether political campaigns have this sort of intermediate volunteer role, but they definitely are tops at mobilizing "worker bee" volunteers, the mainstay of all electioneering. Worker bees are people who offer to help for a few hours, days or months at a time. Most rise to the occasion in the "heat" of the political race and the campaigns usually find ways to accept them all. Election specialists know that the act of volunteering for a candidate cements each person’s loyalty to that candidate. Volunteers who give their time (a precious commodity) are more likely to vote for that candidate, and urge others to do so, too. That is why it is so important for campaigns to welcome every offer to volunteer and to ensure each volunteer has a meaningful task.

Spontaneous to Not Even Thinking about It 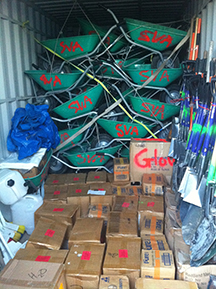 The spontaneous volunteers commonly brought forth by natural disasters run the gamut from truly helpful to eager but irrelevant, or even irritating (if they show up unannounced in the wrong place at the wrong time with the wrong skills). But because so much of emergency response is physical labor – hauling sandbags, clearing debris, distributing supplies –often the more strong arms the better.

Depending on the situation, people who appear on their own to "help" may be well coordinated and given useful tasks, or may be turned away by officials in charge. This does not mean they necessarily go home! In a crisis, some volunteers don’t try to affiliate with civil authorities or nonprofit organizations, but simply start helping. They assist people they see who are shoveling out mud from their homes or moving felled trees. They hand out their own blankets and food. Perhaps the best example of the impact possible by self-directed volunteers determined to help no matter what was the Student Volunteer Army that emerged in Christchurch, New Zealand after the devastating earthquake there two years ago.*

I have said before that "volunteers are the silver lining in the cloud of disaster" and the truth of that statement is apparent in every emergency. What is largely unrecognized, however, is the uncounted amount of neighbor-helping-neighbor that occurs: the human reaction to real need. Should we call such community spirit "volunteering"? It may not matter what we call it, but can we tap into such potential in less stressful times?

In the same vein, how do we encourage citizens to care about daily governance issues and not just a high-powered election every four years? Can we?

So it’s clear that both hurricanes and national elections mobilize volunteers and we can see similar patterns in both efforts. But we need to be careful not to leap to the conclusion that all these volunteers are interchangeable. They are not. They are all serving to be of help, but that is their common method of accomplishing goals, not their motivation. Of course, someone may haul sandbags and be a poll watcher, but most often we are talking about very different individuals.

Four years ago the successful Obama presidential campaign was recognized for mobilizing thousands of young voters for the first time – supporters who worked hard in tangible ways (communicating through the Internet) to win the election. In the months following, campaign staff transitioning into administration jobs spoke to me and others, asking "How do we keep these volunteers involved?" Through initiatives such as United We Serve, they attempted to channel the enthusiasm for electing the president into non-political, human service volunteer work, describing it as a way to continue support of the administration’s goals. And they got frustrated when it didn’t work.

They should not have been surprised. Volunteers whose adrenalin spikes at the thought of an election battle do not necessarily get excited at personally working with the elderly or children, and vice versa. Volunteers who jump at the chance to help people in crisis may not jump to help with long-term, day-to-day operations of a nonprofit. This does not make either group apathetic, uncaring, or uninvolved. Just as we choose paid jobs to match our interests and personalities, we roll up our sleeves to help with causes in different ways. Volunteer resources managers need to expect these differences and strive to connect with the right volunteers at the right time for them and for the activities to be accomplished.

At the moment, the wonderful thing is that we are seeing a huge multiplication of hundreds of thousands of engaged citizens, all finding a way to put time and energy into making a difference. We are united in the desired outcome of recovery from the storm and to elect whomever our preferred candidate to office.

After the clean up, political officials at all levels will thank volunteers for stepping up to get communities back together. On election night, every single candidate, winners and losers, will get up to the microphone and say, "…and I wouldn’t be here tonight if it were not for all the many volunteers who worked so hard for me!" And they will all be right.

So best wishes to everyone in the eastern United States for getting through the next week, environmentally and politically. But no matter where you are or who your candidate is, listen for the many times you will hear "volunteers" mentioned and praised in disasters and elections, remembering the incredible diversity of what the term "volunteering" really implies.

* See the e-Volunteerism article, “Students vs. The Machine: Lessons Learned in the Student Community Following the Christchurch Earthquakes” for more from the leader of this effort.